Studies in Media and Communications 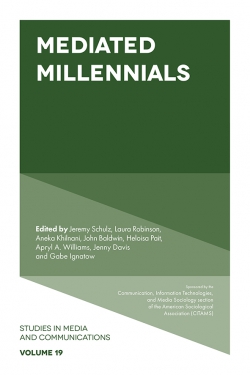 Studies in Media and Communications is proud to be sponsored by the American Sociological Association Section on Communication, Information Technologies, and Media Sociology (CITAMS).

Each year, the series publishes two volumes that capitalize on the series’ sponsorship by the Communication, Information Technologies, and Media Sociology Section of the American Sociological Association. The series consists of two annual volumes, bringing together cutting edge research on new media that are highlighted at the CITAMS business meeting.

Contributions are double blind peer-reviewed and thanks to a short publication cycle, most volumes are published within a year. Given the breadth of the fields contributing to the study of media and communication, the parameters are set as broadly as possible. As long as the research speaks to the theme(s) identified in each call for submissions, the series aims to encompass research on emergent phenomena, as well as studies with a historical or longitudinal dimension.

Submissions may be empirical, theoretical, methodological, or synthetic statements of significant developments in the field. Empirical submissions may make use of any method or approach. The editors particularly welcome any submissions with an international, comparative, and/or global angle of vision.

To submit a proposal to this series, please contact the series editors via email: