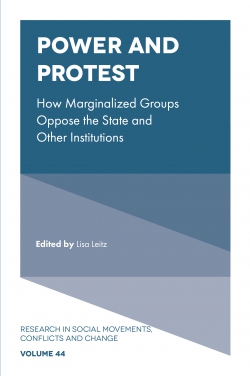 Research in Social Movements, Conflicts and Change (RSMCC) publishes peer-reviewed, original research that has helped define and advance scholarship in social movements, conflict resolution, and social and political change for more than 40 years. RSMCC enjoys a wide library subscription base for the book versions, and all chapters are also available online through Emerald’s subscription site, Social Science eBook Series Collection.

Submit your proposal Call for proposals

The series was established in 1977 by editor, Louis Kriesberg, the Maxwell Professor of Social Conflict Studies at Syracuse University's Maxwell School of Citizenship and Public Affairs. Patrick G. Coy, who founded the School of Peace & Conflict Studies at Kent State University, edited the series from 2000 until 2018. Today the RSMCC series continues its leading role as an important outlet for quantitative and qualitative data-driven research, under the direction of its next editor, Lisa Leitz.

RSMCC generates new knowledge about central aspects of human life: why and how we organize into movements for political and social change, and why and how we engage social conflicts and build peace. Social movement scholars have used the RSMCC series to connect their research with theories of peacebuilding and nonviolence while other scholars have used the series to explore new frontiers in conflict resolution and patterns of violent non-state actors. The series has provided an important home for interdisciplinary and international scholarship at the forefront of research and theory development related to societies’ struggles over resources, power, and agency.

RSMCC offers scholars an opportunity to submit their research for possible inclusion as a chapter in one of the leading sources of research and theory-building in the field. This volume will focus on race and ethnicity, but we welcome submissions appropriate to any of the three broad foci reflected in the Research in Social Movements, Conflicts and Change (RSMCC).While Volume 46 will be open to all submissions, one section will be devoted to movements for racial equity and the operation of race in social movements. For the remaining chapters, we particularly welcome research examining the role of race and/or ethnicity in conflicts and social change. The recent and global racial justice protests, led by Black Lives Matter, offer many important avenues for examining the continuing significance of race, and we encourage analyses of this movement, as well as the role of the intertwined concepts of race and ethnicity in social movements more broadly. We also encourage submissions examining these issues in social change organizations beyond those considered protest groups.

To be considered for inclusion in Volume 46, papers must arrive by December 31, 2020. Earlier submissions are especially welcomed. Initial decisions are generally made within 10-12 weeks. Manuscripts accepted for this volume will have gone through double-blind peer review.

Send submission as a WORD document attached to an email to Lisa Leitz, RSMCC editor-in-chief, at rsmcc@chapman.edu. For initial submissions, any standard social science in-text citation and bibliographic system is acceptable. Remove all self-references in the text and in the bibliography. Word counts should generally not exceed 12,000 words, inclusive of supplemental materials (abstract, tables, bibliography, notes, etc.). Include the paper’s title and an unstructured abstract on the first page of the text itself. Send a second file that contains the article title, the unstructured abstract, and full contact information for all authors.

To submit a proposal to this series, please contact the series editor via email:

This title is indexed in Scopus.

Volumes from this series are included in the Thomson Reuters Book Citation Index.