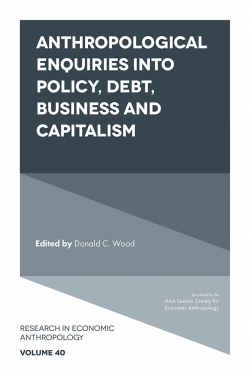 Research in Economic Anthropology (REA) is the longest-running book series exclusively dedicated to economic anthropology, and enjoys a high reputation as a promoter of “the comparative study – though time and space – of economic systems in their broader sociocultural context”, as editors Dannhaeuser and Werner described their aim in the introduction to Volume 21 (2002, p. 1).

The series was originally a publication of JAI Press (Greenwich, Connecticut) and was edited by George Dalton, close associate of noted economic historian Karl Polanyi. Under the editorship of Dalton, REA carried both previously published material and original research reports and essays. Barry Isaac of the University of Cincinnati, who edited Volumes 6 through 20, began the policy of including only original material in the series, and made special efforts to promote greater involvement of archaeology in the study of human economic behavior. Norbert Dannhaeuser and Cynthia Werner, of Texas A&M University, took over editorship from Volume 21, and Donald C. Wood, of Akita University (Japan), has been series editor since the publication of Volume 25. There have also been guest-edited volumes in the series recently – notably Volumes 23 (2004) and 27 (2008).

As an anthropological series, REA is especially concerned with empirical ethnographic research, but more theory-oriented essays and reviews are also accepted for consideration, as are submissions by non-anthropologists. Many well-known economic anthropologists and members of SEA have contributed works for the series. Today, with its considerable momentum, REA continues to promote economic anthropology and improve our understanding of human economic behavior. All papers in REA are subject to double-blind peer review.

We are pleased to announce our 2020 Literati Award winners.


When The Big Ones Abandon the Marketplace: Morals and Politics of Price in Equatorial Guinea
Alba Valenciano-Mañé