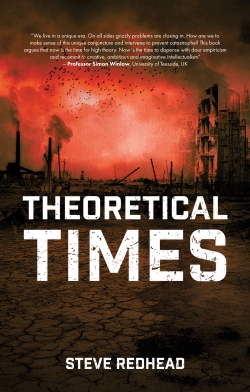 Description
In Theoretical Times, Steve Redhead describes the post-crash economic, environmental, political and cultural condition we live in today. As the rise of the international right - Donald Trump, Brexit, Marine Le Pen - swarms the globe, a new global battle within the right is developing: the globalists and neo-liberals versus the economic nationalists and protectionists. What then are the prospects for a resurrected theoretical politics of the left?
Theoretical Times considers the work of theorists such as Alain Badiou, Slavoj Žižek, Jean Baudrillard and Paul Virilio, in this innovative reinvention of theory and the politics of theory. After the global financial crash the world is being hollowed out and we find ourselves in what Žižek calls a desperate state of hopelessness, the “new dark ages”. Accelerated culture sees us digitally entertaining ourselves to death but leaves us exhausted and frightened waiting for World War Three. Theoretical Times offers new theoretical resources as a way out of the quicksand.
Contents
Introduction: Theory The Day After Tomorrow
Chapter 1. Time For Theory
Chapter 2. Lust For Theory
Chapter 3. Undead Theory
Chapter 4. The Dialectical Game
Chapter 5. The Resistible Rise of Donald Trump
Chapter 6. Theory Will Tear Us Apart
Conclusion: Theory Complete, Complete Theory
About the author
Steve Redhead is Professor of Cultural Studies at Flinders University, Australia. He is also Adjunct Professor of Cultural Studies, York University, Canada. He has published seventeen books including Football and Accelerated Culture: This Modern Sporting Life, We Have Never Been Postmodern: Theory at the Speed of Light, The Jean Baudrillard Reader, The Paul Virilio Reader and Paul Virilio: Theorist For An Accelerated Culture.
Reviews
“We live in a unique era. On all sides grizzly problems are closing in. It's clear that what exists cannot continue indefinitely. How are we to make sense of this unique conjuncture? How can we intervene in the world to prevent catastrophe? According to Redhead, now is the time for high theory. Now is the time to dispense with dour empiricism and recommit to creative, ambitious and imaginative intellectualism. More and more students are waking up to the institutionalised blandness of the social sciences and seeking out the work of a new generation of theorists who offer startling accounts of our economy, culture and politics, and who dare to imagine what the future may hold. Redhead focuses on the work of Zizek, Virilio, Baudrillard and Badiou, and, in his account of these great theorists, he displays an admirable commitment to making difficult ideas comprehensible. This book is just what we need to come to terms with these theoretical times.” – Professor Simon Winlow, University of Teeside, UK