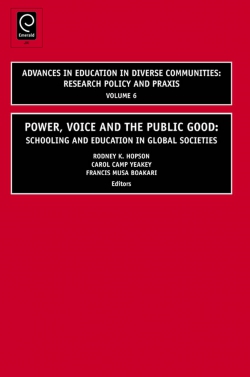 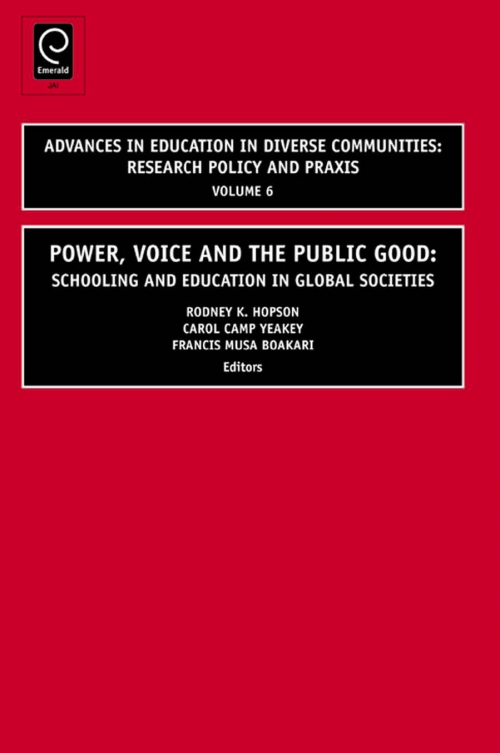 Power, Voice and the Public Good: Schooling and Education in Global Societies Vol: 6

Description
Three themes underpin the tripartite structure of "Power, Voice, and the Public Good", including attention to the definitional and theoretical underpinnings of globalization; the ubiquitous nature and topical display of globalization; and, the possibilities of understanding, redefining and rethinking aspects of globalization with the backdrop of issues that relate to education, and the pursuit of public good. A plethora of examples how education and schooling respond to and are driven by larger global networks, demands, and discourses are explored. Each chapter of the book consistently addresses ways of looking at the hope and promise of education and schooling in spite of the advent, realities, and complexities of their globalized societies.
Contents
Globalization, education and the trouble with peace. Neoliberalism versus social justice: A view from Canada. The cost of education for some: Educating illegals in the U.S.. The effects of the neo-liberal agenda on education in some African countries. Schools as markets: Bilking the young and powerless. What to teach our global citizens: applying transnational civics frameworks in four post-communist states. Schooling and education for the San (Ju|'hoansi) in Namibia: Between a rock of colonialism and the hard place of globalization. Globalization from above, globalization from below: Mechanisms for social disparity and social justice in higher education. Globalization, knowledge economy and the emergence of private universities in Sub-Saharan Africa. The globalisation of higher education: Assessing the response of the University of the West Indies. Learning to get ahead in a global society: Postsecondary access of people of color in the U.S.. International education in a global context. Impact of Japanese colonial legacy on globalization of Korean education. Globalization, education, and cultural change in the Navajo nation: Snapshots of situated appropriation and adaptive intelligence in the U.S. southwest. Globalization's strategic union: decentralization, efficiency, and the implications for educational governance in Spain. Thailand and globalization: The state reform utilities of Buddhism, culture, and education and the social movement of socially and spiritually engaged alternative education. The centrality of context in the development of the commonwealth teacher recruitment protocol: Relevance for international teacher migration. From producing citizens to producing managers: Education in a globalized world. Introduction. List of Contributors. Dedication. Preface. Advances in Education in Diverse Communities: Research, Policy and Praxis. Power, voice and the public good: Schooling and education in global societies. Copyright page. Subject Index.