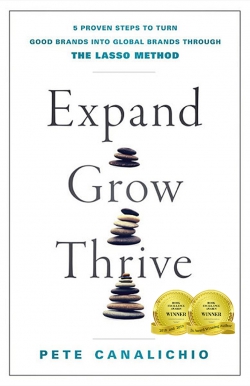 Description
Using powerful storytelling and unique access to the personal perspectives of top-flight marketers who have developed truly world-class business growth programs, Pete Canalichio shows us how successful marketers have extended and expanded their brands, and the challenges they have had to overcome along the way.
The LASSO model (Lateral; Addictive; Storied; Scalable; Own-able) offers a simple, accessible and effective way for marketers to get their heads around the desired attributes of highly successful growth programs. With insightful advice, anecdotes and tips from leading brand licensing professionals, household names like Coca-Cola and Disney, senior marketers and inspiring individuals, Canalichio has created a measured and proven "Think Big, Get Big" framework to truly help your brand first expand, grow successfully, and ultimately thrive.
Contents
Prelude: Addressing the Expansion Riddle
Chapter 1. Pinning their hopes
Chapter 2. Read and lead - How to succeed in the connective economy
Chapter 3. Lateral - Beyond where they've been
Chapter 4. Addictive - Growing to love
Chapter 5. Storied - The power of heritage in a world of action
Chapter 6. Scalable - How the biggest names in the business keep expanding
Chapter 7. Own-able - Why who you are decides who you seem
Chapter 8. Is your brand optimized?
Chapter 9. Making the decision to license
Chapter 10. License to operate - the future of the licensed brand
Epilogue
Appendix
About the author
Pete Canalichio is a brand expansion and licensing strategist with over 25 years of business experience. Having worked in brand licensing for close to 20 years, he is considered an expert on the subject and is repeatedly asked to speak at branding and licensing conferences and leading business schools globally.
Before starting his business career, Pete attended the U.S. Naval Academy where he earned a BS in physics. He served in the Navy as an aviator honing his leadership and decision-making skills as commander of a large multi-engine aircraft and 12-member crew during the height of Cold War tensions. Clear-headed and decisive under those extraordinary circumstances, he has applied that same leadership style to every challenge and opportunity he has faced in a distinguished career with such firms as Coca-Cola, Newell Rubbermaid and most recently, Licensing Brands, a business that he founded in 2009.
Pete began his branding and licensing career at Coca-Cola where he executed multiple programs in support of the Olympic Games, FIFA World Cup and NASCAR. Recruited to Newell Rubbermaid, Pete oversaw Rubbermaid’s global licensing program. For his contributions, Pete received the MVP Award.
Pete earned his MBA from the University of North Carolina Kenan-Flagler Business School where he was a Richard H. Jenrette fellow and salutatorian. Throughout his career, Pete has operated in the global arena, having worked in more than 40 countries and managed extensive projects across national and continental borders.