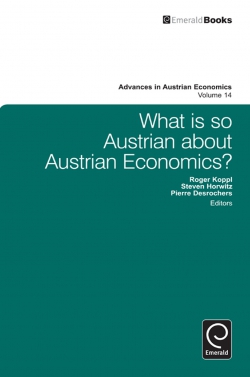 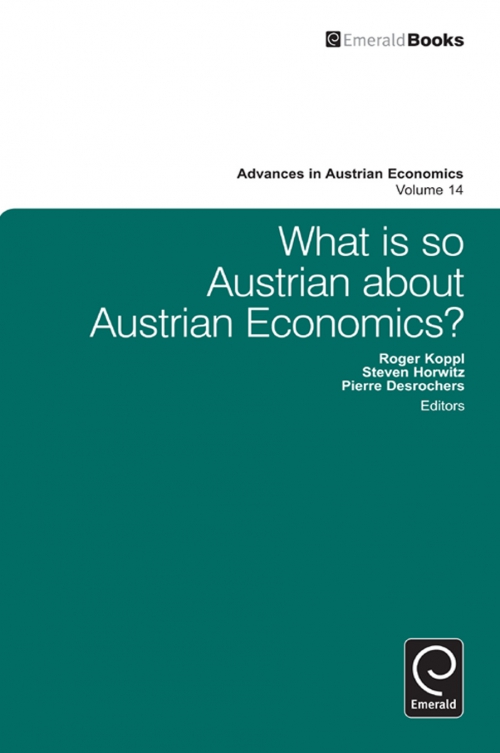 What is so Austrian about Austrian Economics? Vol: 14

Description
Leading scholars consider Austrian economics from several perspectives such as characteristic themes of entrepreneurship and uncertainty, scientific methods such as mathematical complexity theory and experimental economics, and historical contexts such as pre-war Vienna and post-war France. Placing "Austrian economics" in these multiple contexts helps to reveal the rich texture of the Austrian tradition in social thought and its multiple connections to current research in diverse fields. Applications to the theory of the trade cycle and to foreign intervention suggest that the Austrian tradition contains possibilities not yet full explored and exploited. The volume gathers together papers presented at the second biennial Wirth conference on Austrian economics, held in October 2008 when the crisis of Fall 2008 was still new and shocking. This coincidence of timing makes policy issues and crisis management a kind of leitmotif of the volume. If, as keynote speaker David Colander argues, Austrians have a comparative advantage in political economy, then its stock should rise in times of crisis and political uncertainty. The volume provides evidence in favor of this view. Contributors include David Colander, Richard Wagner, Jeffery McMullen, J. Barkley Rosser, Jr., Steve Horwitz, Richard Ebeling, Chris Coyne, and Peter Boettke.
Contents
List of Contributors. Introduction: Regrettably exciting times. Opening remarks. The domain of Austrian economics. An “Austrian” interpretation of the meaning of Austrian economics: History, methodology, and theory. The context of context: The evolution of Hayek's epistemic turn in economics and politics. How did Austrian economics thrive outside of Vienna: the case of French political economy. Perspective taking and the heterogeneity of the entrepreneurial imagination. Why Austrians should quit worrying and learn to love the lab. How complex are the Austrians?. Change within permanence: time and the bivalent logic of economic analysis. The role of ideal types in Austrian business cycle theory. The fatal conceit of foreign intervention. Advances in Austrian economics. Advances in Austrian economics. Copyright page.