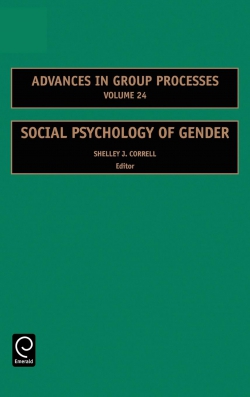 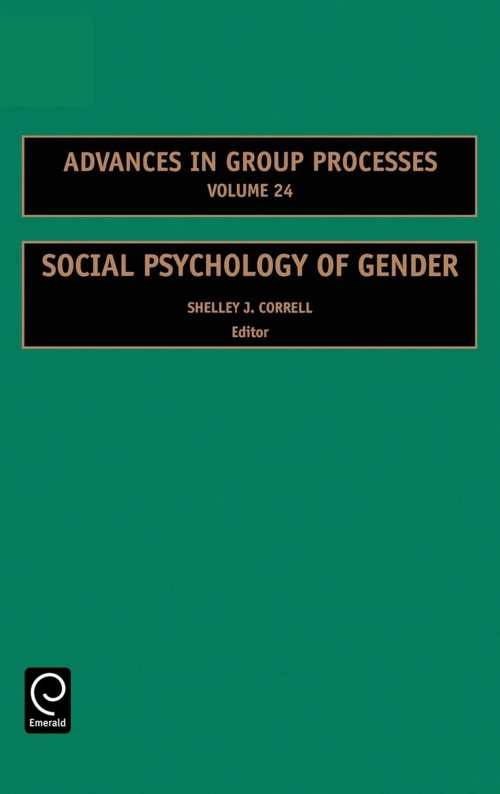 Description
Advances in Group Processes publishes theoretical analyses, reviews, and theory-based empirical chapters on group phenomena. Volume 24 includes papers that address fundamental issues relating to the Social Psychology of Gender. The social psychology of gender analyzes the ways gender shapes and is shaped by social interaction. This includes the cognitive processes through which gender influences the way we perceive, interpret, and respond to our social world; it also includes the mechanisms through which interaction defines and transmits meaning about gender. The volume emphasizes the importance of understanding gender as a multilevel structure that includes cultural beliefs and distributions of resources at the macro level, patterns of behavior at the interactional level, as well as roles and identities at the micro level.The volume begins with an introduction that discusses the overall theoretical and methodological orientation of the social psychology of gender. The first chapter after the introduction reviews the history of gender research in psychology, and in particular provides excellent accounts of research on benevolent sexism and backlash effects. The second chapter provides an overview of research on two types of stereotyping descriptive and prescriptive as well as offering suggestions for organizations interested in pre-empting these types of bias. The third chapter reviews recent research on the role that beliefs about gender play in organizational decision-making, with an emphasis on hiring and firing decisions.The fourth chapter synthesizes a range of literatures in order to explain how interactional mechanisms restrict womens ability to be both liked and respected, such that their choices are often made by navigating pragmatic alternatives rather than any explicit consent to hierarchical gender relations. The fifth chapter develops a theory of the authors that addresses the interaction of gender and social networks in the workplace; the central argument is that, because men occupy most of the high status positions in organizations, women and men must follow different strategies when developing their professional networks.Taken as a whole, the first five chapters provide a thorough exploration of a number of pressing problems in the area of gender in the labor market and the workplace. The sixth chapter reviews the theoretical and empirical literature on gender and emotions, and then presents results from a new study showing that contextual factors matter more than gender in determining responses to personal experiences of injustice. The seventh chapter empirically and formally evaluates the hypothesis that women are more religious than men because they are more risk-averse and therefore are more motivated by the threat of punishment in the afterlife, and concludes that risk aversion does not explain differences in mens and womens religiosity.The eighth chapter engages a new and more sophisticated perspective on the interactive process of socialization to set a research agenda for obtaining better knowledge about childhood sexual socialization. The ninth chapter presents the results of two new experiments, which suggest that mens tendency to self-handicap (impair their own performance) to a greater degree than women is related to concerns about protecting their status or self-image.The tenth chapter proposes a novel social psychological explanation for the predominance of women on college campuses and develops an experimental paradigm to evaluate this explanation. This group of chapters develops explanations for a variety of similarities and differences in the experiences of men and women throughout the life course. The volume closes with a chapter that draws on a group process approach to explain why gender inequality persists in the face of economic and institutional changes that increasingly de-emphasize difference based on gender.Overall, the volume includes papers that reflect a wide range of theoretical approaches to the social psychology of the workplace, and contributions by major scholars from multiple disciplines that work in the general area of group processes. It includes papers that address fundamental issues relating to the Social Psychology of Gender. It explains the cognitive processes through which gender influences the way we perceive, interpret, and respond to our social world. It emphasizes the importance of understanding gender as a multilevel structure.
Contents
An Introduction to the Social Psychology of Gender. Sex Differences, Sexism, and Sex: The Social Psychology of Gender from Past to Present. Gender Stereotypes in the Workplace: Obstacles to Women's Career Progress. The Effects of Gender Stereotypes on Judgments and Decisions in Organizations. Cooperation ? Consent: How Women React to their Place, based on Social Relations and Ambivalent Sexism. “Street Cred” and the Executive Woman: The Effects of Gender Differences in Social Networks on Career Advancement. Feeling Injustice, Expressing Injustice: How Gender and Context Matter. The Devil made her do it? Evaluating Risk Preference as an Explanation of Sex Differences in Religiousness. The Sexual Socialization of Young Children: Setting the Agenda for Research. Status Processes and Gender Differences in Self-Handicapping. Women's Predominance Incollege Enrollments: Labor Market and Gender Identity Explanations. Gender as a Group Process: Implications for the Persistence of Inequality. List of Contributors. Preface.