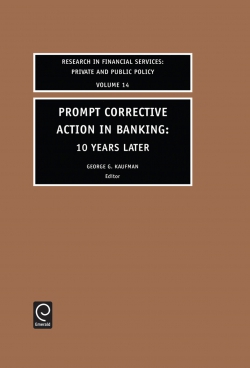 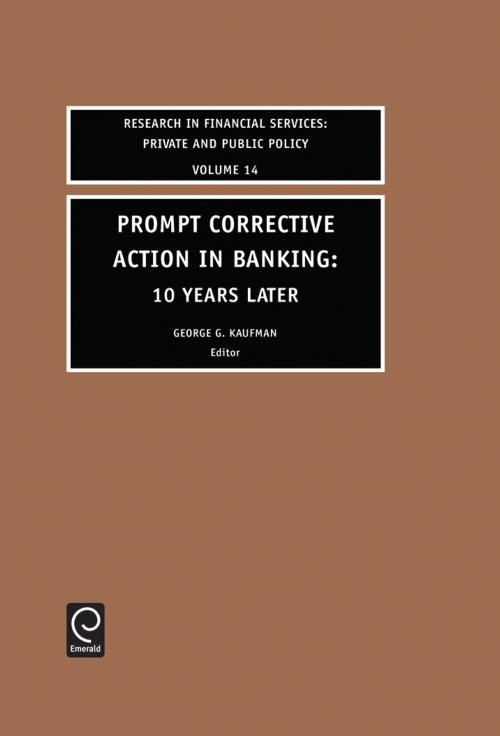 Description
In December 1991, the U.S. Congress enacted and President George Bush signed the Federal Deposit Insurance Corporation Improvement Act (FDICIA). The Act was motivated by the severity of the U.S. banking and thrift crisis of the 1980s and represented the most important banking legislation since the Banking (Glass-Steagall) Act, which was enacted in 1933 at the depth of the previous most severe banking crisis in U.S. history. Between 1980 and 1991, some 1,500 commercial and savings banks, representing 10 percent of the industry in 1980, failed and more than 1,000 savings and loan associations, representing 25 percent of the industry, failed. In addition, delays in resolving the failures helped to increase the cost beyond the resources of the then Federal Savings and Loan Insurance Corporation (FSLIC) and required the taxpayers to pay some $150 billion To insured depositors at these institutions. The large number and high cost of the failures were in large measure attributable to serious flaws in the extant government-sponsored deposit insurance program that encouraged insured institutions to assume excessive credit and interest rate risks and bank regulators to delay imposing corrective sanctions on troubled institutions and resolving economically insolvent institutions. FDICIA attempted to correct these flaws by reforming the deposit insurance structure through requiring regulatory prompt corrective action (PCA) and least cost resolution (LCR).PCA mandated a series of both discretionary and mandatory sanctions that the regulators first may and then must apply as an institutions' financial health progressively deteriorates as reflected in a number of capital-to-asset ratios. These sanctions are intended to encourage the institutions to reverse their deterioration before it is too late. But if they fail to do so, PCA requires resolution of the institution before their book-value capital is fully depleted. This is intended to minimize any losses from failure. The designed PCA sanctions are modelled after the actual sanctions that the private market typically imposes on troubled firms in uninsured industries and that are distorted in banking by the government-provided insurance. Thus, FDICIA attempts to supplement regulatory and supervisory discipline with stimulated market discipline. Since its introduction in the United States in 1991, PCA has been explicitly or implicitly adopted in word if not spirit in many developed and developing countries with greatly different banking and regulatory structures. How well has it worked or could it work? The papers also consider reinforcing or alternative prudential techniques. Thus, they add to our storehouse of knowledge on improving the performance of banking systems and should prove useful to researchers, practitioners, and policy-makers both in evaluating extant regulatory structures and in designing new or modified structures. All the papers were presented by the authors and commented on by the discussants at invited sessions at the annual meeting of the Western Economic Association in Seattle, Washington in July 2002. Maia Pykina (Loyola University Chicago) provided assistance both in arranging the session programs and in preparing the papers for publications.
Contents
List of contributions. Introduction (G.G. Kaufman). Part I Market discipline by bank creditors. Subordinated debt and prompt corrective regulatory action (D.D Evanoff, L.D. Wall). Can feedback from the jumbo-CD market improve off-site surveillance of community banks? (R.A. Gilbert et al.). Did FDICIA enhance market discipline on community banks? (J.R. Hall et al.). Comment (B.E. Gup). Comment (A.C. Hess). Part II PCA and market discipline: The U.S. experience. The major supervisory initiatives post-FDICIA: Are they based on goals of PCA? Should they be? (R.A. Eisenbeis, L.D. Wall). Differentiating among critically undercapitalized banks and thrifts (L. Shibut, et al.). Pricing bank distress: Before and after PCA (G.A. Hanweck, L.J. Spellman). Comment (H. Rosenblum). Comment (L.R. Mote). Part III. PCA and market discipline: The non-U.S. experience. Do depositors discipline Swiss banks? (U.W. Birchler, A.M. Maechler). PCA in International practice (A. de Juan). When does financial liberalization make banks risky? An empirical examination of Argentina, Canada and Mexico (W.C. Gruben, et al.). Comment (W.C. Hunter). Comment (D.T. Llewellyn).