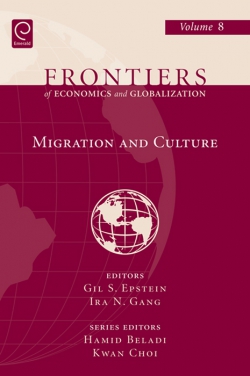 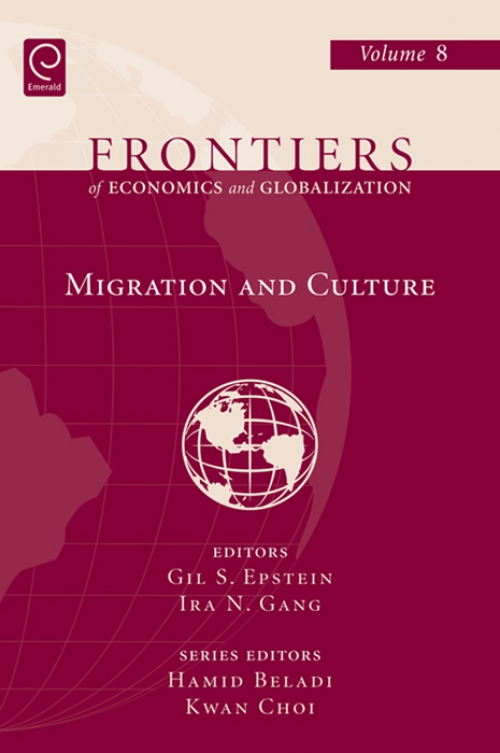 Description
Culture is not new to the study of migration. It has lurked beneath the surface for some time, occasionally protruding openly into the discussion, usually under some pseudonym. The authors of the papers in this volume bring culture into the open. They are concerned with how culture manifests itself in the migration process for three groups of actors: the migrants, those remaining in the sending areas, and people already living in the recipient locations. The topics vary widely. What unites the authors is an understanding that though actors behave differently, within a group there are economically important shared beliefs (customs, values, attitudes, etc.), which we commonly referred to as culture. Culture plays a central role in our understanding of migration as an economic phenomenon. While the papers in this volume occasionally touch on this diversity and the conflicts it engenders, this is not the focus of the volume. Here the emphasis is on the distinctions in culture between migrants, the families they left behind, and the local population in the migration destination. The new interactions directly affect all three groups. Assimilation is one result; separation is also a possibility. Location choice, workplace interaction, enclave size, the opportunity for the migrant obtaining credit in their new country, the local population's reaction to migrants, the political culture of the migrants and local population, links to the country-of-origin, and the economic state of the host country, all contribute to the classic conflict between assimilation and separation. This volume will consider different aspects of the process of assimilation considering the affect on the migrants themselves, on the local population, on the families left at the home country and others.
Contents
Dedication. About the series: Frontiers of Economics and Globalization. About the Volume: Migration and Culture. List of Contributors. Preface. Chapter 1 Migration and Culture. Chapter 2 Informational Cascades and the Decision to Migrate. Chapter 3 The Measurement of Income Polarization by Ethnic Groups: The Case of Israel Population. Chapter 4 The Effects of School Quality in the Origin on the Payoff to Schooling for Immigrants. Chapter 5 Development and Migration: Lessons from Southern Europe. Chapter 6 Geographic Dispersion and Internal Migration of Immigrants. Chapter 7 Understanding the Wage Dynamics of Immigrant Labor: A Contractual Alternative. Chapter 8 Interactions between Local and Migrant Workers at the Workplace. Chapter 9 Ethnic Competition and Specialization. Chapter 10 Nationality Discrimination in the Labor Market: Theory and Test. Chapter 11 Culture, Investment in Language and Earnings. Chapter 12 Immigration: America's Nineteenth-Century “Law and Order Problem?”. Chapter 13 A Political Economy of the Immigrant Assimilation: Internal Dynamics. Chapter 14 Assimilating Under Credit Constraints: Public Support for Private Efforts. Chapter 15 Immigrant Networks and the U.S. Bilateral Trade: The Role of Immigrant Income. Chapter 16 The Societal Integration of Immigrants in Germany. Chapter 17 Who Matters Most? The Effect of Parent's Schooling on Children's Schooling. Chapter 18 Intergenerational Transfer of Human Capital under Post-War Distress: The Displaced and the Roma in the Former Yugoslavia. Chapter 19 Household Structure of Recent Immigrants to Israel. Chapter 20 Circular Migration or Permanent Return: What Determines Different Forms of Migration?. Chapter 21 Labor Migration, Remittances, and Economic Well-Being: A Study of Households in Rajasthan, India. Chapter 22 Promoting the Educational Success of Latin American Immigrant Children Separated from Parents during Migration. Chapter 23 Cultural Differences in the Remittance Behaviour of Households: Evidence from Canadian Micro Data. Chapter 24 FSU Immigrants in Canada: A Case of Positive Triple Selection?. Chapter 25 What Drives Immigration Policy? Evidence Based on a Survey of Governments' Officials. Chapter 26 Changes in Attitudes toward Immigrants in Europe: Before and After the Fall of the Berlin Wall. Chapter 27 The Implications of Social Norms on Immigration Policy. Chapter 28 Ethnic Fragmentation, Conflict, Displaced Persons and Human Trafficking: An Empirical Analysis. Subject Index. Author Index. Frontiers of economics and globalization. Frontiers of economics and globalization. Copyright page.