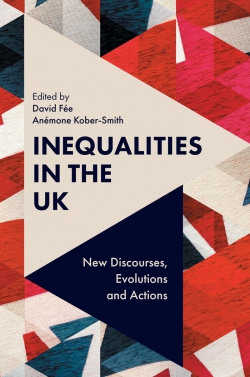 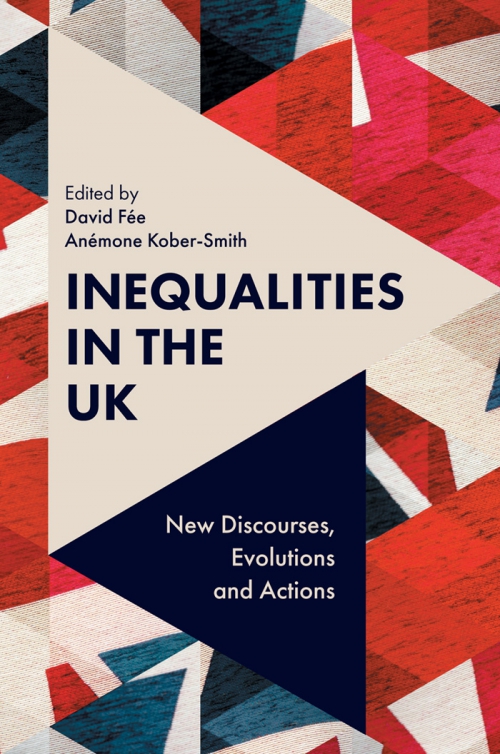 Inequalities in the UK: New Discourses, Evolutions and Actions

Description
This book addresses the question of the extent of and responses to inequalities in the UK in 2017 in the wake of the 2008 Great Recession. Inequality is the issue that won’t go away, a real world issue affecting all facets of society with political and economic developments such as austerity measures, Brexit and changes in political leadership impacting the inequality landscape.
Six of the chapters examine the extent of economic inequalities and poverty using quantitative and qualitative methods that help map regional differences, compare the UK with the rest of the EU and go beyond the traditional measures and concepts. Seven chapters explore how inequalities have evolved since 2008 and have been tackled by policy makers in five policy areas (health, housing, education, gender and immigration) taking into account the new legislative framework and in one party (labour). Finally, six others address the issue of the governance of inequality by looking at how inequality features in the political agenda of the devolved assemblies in Northern Ireland, Scotland, Wales as well as at a local level in Ipswich and London.
Based on recent surveys and current academic thinking, this book provides an up-to-date account of the extent and distribution of inequalities in the UK, of the evolving ways in which inequalities are measured and addressed as well as the changing perception of inequalities by the general public and policy-makers.
Contents
Part 1: Mapping Inequalities in the UK today: the changing face of inequalities?
1, Economic Inequalities in the UK since 2008; Nicholas Sowels
2, Tackling Inequality is an Economic Imperative; Stewart Lansley
3, Inequalities in England: Regional Differences and New Perspectives on a Geopolitical Issue; Mark Bailoni
4, ‘A Classless Society?’ Making Sense of Inequalities in the Contemporary UK with the Great British Class Survey; Niall Cunningham, Helene Snee and Fiona Devine
5, What the Minimum Income Standard Tells us About Living Standards in the UK; Abigail Davis and Matt Padley
6, Inequality in the UK in a Comparative Perspective; Jonathan Bradshaw and Oleksandr Movshuk
Part 2: The Equality Agenda Then and Now: Political Debates, Public Policies and Outcomes
7, The Labour Party and the Egalitarian Project; Eric Shaw
8, Diluting Substantive Equality: Why the UK Government Doesn’t Know if its Welfare Reforms Promote Equality; Simon Roberts, Bruce Stafford and Katherine Hill
9, Housing Policy and the Making of Inequality; Alan Murie
10, Expanding Opportunities at School Level in England in the Early 21st Century: A Government Priority?; Anne Beauvallet
11, Proprotionate Universalism as a Route to Mitigating Health Inequalities? Exploring Political, Policy and Practice Uncertainties in Times of Austerity; Mhairi Mackenzie, Annette Hastings, Breannon Babbel, Sarah Simpson and Graham Watt
12, Gender Inequalities in Britain: Bridging the Gap in Pay and Prospects; Louise Dalingwater
13, Disabled Asylum Seekers as Experimental Subjects in a Broader Systemic Agenda of Inequality; Rebecca Yeo
Part 3: The Governance of Inequality: Local Initiatives and Responses in a Multi-Level Polity
14, It’s Terrible Having no Job, People Look Down on You and You’ve Never Enough Money: Lowestoft Case Study; Emma Bond
15, Combating Unequal Inclusion of Immigrants into the Host Society: Comparing Policy Responses in London and Paris; Markéta Seidlová and Paul Chapman
16, Reducing Inequalities in Scotland: Firm Commitments, Mixed Results After Ten Years of SNP Governments; Edwige Camp-Pietrain
17, Devolution, Recession and the Alleviation of Inequality in Wales; Rhys Davies and Alison Parken
18, Social Inequalities in Northern Ireland; Valérie Peyronel
About the author
David Fee is Professor of British Studies at the University of Sorbonne Nouvelle-Paris 3, France. He specialises in the study and analysis of housing and urban policies in the UK and France. He is the author of many articles and chapters and a book on housing policies, housing and the British welfare state as well as the changing governance of housing in the UK.
Anémone Kober-Smith is Professor of British Studies at the University of Paris 13, France. Her research interests are in the fields of health and healthcare policies, the welfare state, the governance of public services and gendered work policies in the UK (and France). She is the author of many publications, including a book published in France in 2010 on the implementation and impact of managerial reforms in the NHS since the 1980s.