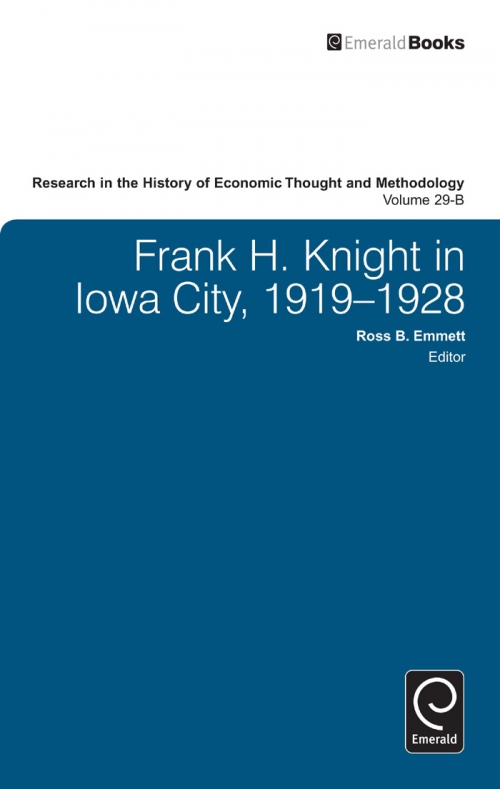 Description
This collection includes both refereed articles and review essays of recent books in the history of economic thought and methodology. The articles highlight research the historiography and methodology of the English Poor Laws, behavioural economics, and the socialist calculation debate; as well as A.D. Roy and portfolio theory and correspondence regarding John Maurice Clark's "Economics of Planning".
Contents
Acknowledgments. Frank Hyneman Knight: The Iowa Years. A Conversation with Ethel Verry Knight. The Problem of Value in Economic Theory. Economics and Business. The Tariff. Business Management: Science or Art?. A “Scientific” Observation Regarding Socialism. In Defense of Agricultural Relief on the General Plan of the McNary-Haugen Measure. Social Organization: A Survey of its Problems and Forms from the Standpoint of the Present Crisis. The Mathematical Method in Treating the Price Problem. Logical Method in the Social Sciences. The “Concept” of Spirituality. On Power: The Invincible Logic of Asceticism. Love and Force. The Ethics of the State. Dismal Science. Non-Economistic Value. Play, Art, and Work: A Little Book on the Value Problem for Students of the Social Sciences. The Relation of Ethics and Economics. The Conflict Between the Religious and the Scientific Attitude Toward Life. Liberalism and Religion, II: The Content of Liberal Religion. Society: Freshman Lecture. Some Explorations in the Twilight Zone Between Economics and Ethics. Science and Human Values: Summary, Partly as it was and Partly as it should have been!. On Force: B–H Group. Some Observations on the why of Human Behavior. Types of Personal Relations: On Personal and Impersonal Association. Science and Efficiency in Physics and Politics. Memorandum to President Jessup on Meredith Plan for Farm Relief. Some Misconceptions in Regard to Federal Taxation. Efficiency and the Social Ideal. The Professor and Farm Relief. Discussion Group in Religion. Being and Doing. Presuppositions of Competition. Jottings on Value: October 8, 1925. What we Want: An Attempt to List Primary Wishes or Elements in Motivation. Some Notes on Value. Jottings on Value: April 10, 1926. Notes on Motivation: Second Installment. Reason, or Rationality, and Behavior, or Value!. Notes on Human Nature and Value. Note in Discussion of Personality. The Issues in Value Theory. Economics and Ethics: Course Outline and Reading List. Notes on Industrial Evolution: To Accompany Ely, Outlines of Economics. Outline and Summary of Price Theory: To Supplement and Amend Ely, Outlines of Economics. Energy, Human Energy, and Value: Review of The Economy of Human Energy. Review of Common Wealth. Economic Theory Restated. Frank H. Knight in Iowa City, 1919–1928. Research in the History of Economic Thought and Methodology. Research in the History of Economic Thought and Methodology. Copyright page.