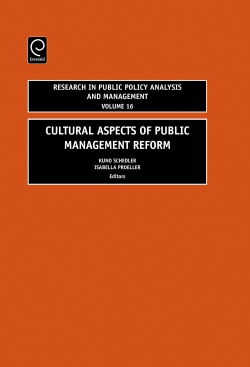 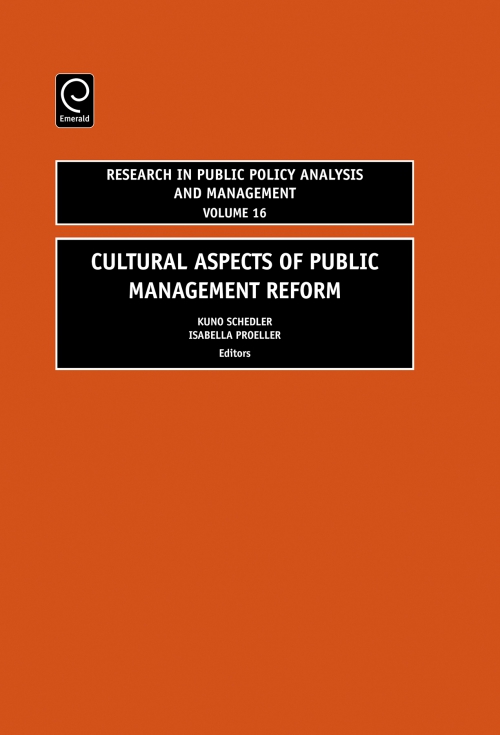 Description
In an international context, public management arrangements differ significantly from country to country, but also regionally and locally. One reason for these differences may be differences in culture resulting in differing views of the state and its institutions. This may sound trivial, but it becomes highly important when public management reform models are proposed and transferred from one country to others, such as was (and still is) the case with, for example, the new public management. Scholars in public management as well as internationally acting practitioners should be aware of the impact culture has on the possibilities and limits of concept transfers between different jurisdictions.Having said this, one precondition for a better consideration of cultural elements in public management reforms is a better understanding of culture itself. Among the public management community, cultural theory has gained considerable attention. There are, however, other concepts for the analysis of cultural facts that may be of interest to the subject, too. In this book, cultural influences (including organizational culture of public organizations) on public management and its reform are explored. The articles address definitions and conceptualizations of culture in the context of public management, cultural artifacts in public management, and give examples of cultural elements in public management from various countries. This volume helps to structure the discussion of cultural elements and points out approaches to study and incorporate cultural aspects in public management research and debate.
Contents
PART I: DEFINING CULTUREPUBLIC MANAGEMENT AS A CULTURAL PHENOMENON. REVITALIZING SOCIETAL CULTURE IN INTERNATIONAL PUBLIC MANAGEMENT RESEARCHKuno Schedler and Isabella ProellerCULTURAL CHARACTERISTICS FROM PUBLIC MANAGEMENT REFORMS WORLDWIDEGeert BouckaertTHE POETICS OF MANAGEMENT, AND THE POLITICS OF ORGANIZATIONAL CULTURES. A SOCIOLOGICAL VIEW ON NPM-REFORMS IN SWITZERLANDChristoph MaederREFORMS OF CENTRAL GOVERNMENT COORDINATION IN OECD-COUNTRIES: CULTURE AS COUNTERFORCE FOR CROSS-NATIONAL UNIFYING PROCESSES?Eva Beuselinck, Koen Verhoest and Geert BouckaertPART II: ARTEFACTS OF CULTUREPUBLIC MANAGERS' RELIGIOSITY: IMPACTS ON WORK ATTITUDES AND PERCEPTIONS OF CO-WORKERSBarry Bozeman and Alex MurdockPUBLIC ADMINISTRATION MODERNIZATION: COMMON REFORM TRENDS OR DIFFERENT PATHS AND NATIONAL UNDERSTANDINGS IN THE EU-COUNTRIESGerhard Hammerschmid, Renate E. Meyer and Christoph DemmkeDETERMINANTS OF CONFIDENCE IN THE CIVIL SERVICE: AN INTERNATIONAL COMPARISONSteven Van de WalleCULTURAL EVOLUTION OF ORGANIZATIONS FROM BUREAUCRACY TO HYPERARCHY AND NETCENTRICITY: REAPING THE ADVANTAGES OF IT AND MODERN TECHNOLOGYFred Thompson and Lawrence R. JonesTIME OUT?Christopher PollittPART III: COUNTRY PERSPECTIVESCULTURE AND PUBLIC MANAGEMENT REFORMS: A REVIEW AND RESEARCH AGENDA ON THE BASIS OF EXPERIENCES IN SWITZERLANDMartin KociGOVERNANCE REFORM OUTCOMES THROUGH CULTURAL LENS: THAILANDBidhya BowornwathanaDECONSTRUCTING ADMINISTRATIVE CULTURE - EXPLORING THE RELATIONSHIP BETWEEN CULTURAL PATTERNS AND PUBLIC SECTOR CHANGE IN THE UK AND GERMANYEckhard SchroterTRIGGERING CHANGE THROUGH CULTURE CLASH: THE UK CIVIL SERVICE REFORM PROGRAM, 1999 - 2005Tony BovairdE-GOVERNMENT IN ASIA: HOW CULTURE AFFECTS PATTERNS OF ADOPTIONClay Wescott