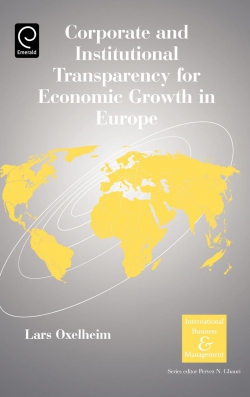 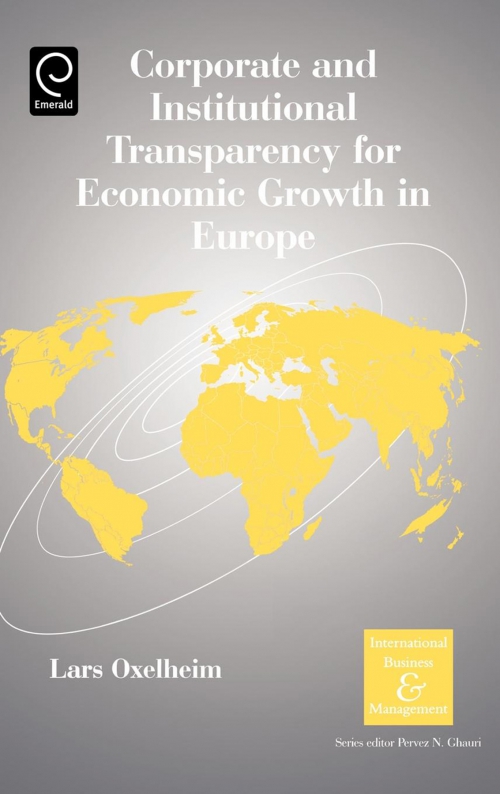 Corporate and Institutional Transparency for Economic Growth in Europe Vol: 19

Description
Transparency has in recent years become a buzzword in the economic-political debate about prospects for economic growth in general and for Europe in particular. A number of events, trends, and developments for example the East-Asian financial crisis, a series of corporate governance scandals in the United States and in Europe, the introduction of the euro as a common currency in part of the European Union, a global trend toward politically independent central banks, growing attention to environmental issues, and attempts to reform the governance structures of supranational and multilateral organizations such as the EU and the UN have made transparency an issue of highest concern. However, the long and winding road leading from improved transparency in Europe to increased economic growth in the region has never been mapped out in a coherent way. The reason is simply that the causal chain from transparency to growth needs to be discussed in a comprehensive, interdisciplinary way, incorporating different research areas and traditions from accounting to economics and political science. This book attempts to bridge that gap in current literature. What is transparency? Are there different kinds of it? What does it do? How much of it do we need, and for what purpose? In this book, the purpose of transparency is assumed ultimately to be higher rates of economic growth, and so the analyses in the different chapters take an instrumental view of transparency, where the relevant question is whether increased transparency leads to more efficient resource allocation. The chapters address transparency in different markets and at different levels: from corporate financial disclosure to lobbying; from the risk incentives facing banks to competition and environmental policies. The book raises important questions and delivers a wealth of insights which will be of great use to a wide spectrum of audiences, including researchers and students on the one hand and policy makers, bureaucrats, and finance and investment professionals on the other. The Editor Lars Oxelheim holds a chair in International Business and Finance at Lund University, Lund and is an affiliate of the Research Institute of Industrial Economics (IUI), Stockholm and of the Fudan University, Shanghai. His current research focuses on the implications of macroeconomic disturbances for corporate performance and issues related to economic and financial integration. He has published some 25 books and numerous articles in the areas of international business and finance, corporate finance and corporate governance. Among his recent monographs are "Money Markets and Politics: A Study of European Financial Integration and Monetary Policy Options" (Cheltenham: Edward Elgar, 2003) (with Jens Forssbaeck), European Union and the "Race for Foreign Direct Investment in Europe" (Oxford: Elsevier, 2004) (co-edited/authored with Pervez Ghauri) and "Corporate Performance and the Exposure to Macroeconomic Fluctuations" (Stockholm: Norstedts Academic Publishers, 2005) (with Clas Wihlborg). This series: provides an international perspective to the study of business, with a special emphasis on management and marketing issues. It deals with such topics as globalization, international business negotiations, cross-cultural communication, entry strategies, doing business in different regions, and future trends. It also focuses on the development of international business theory, methodological issues, the results of empirical studies and the findings of practitioners.
Contents
Contributors Preface Outline of the book Transparency, capital formation, and economic growth Jens Forssbaeck and Lars Oxelheim Economic policy and institutional transparency: The ECB Iain Begg Transparency in competition policy Philippe Gugler Environmental policy and institutional transparency in Europe Thomas L. Brewer and Sarianna M. Lundan Transparency in human capital policy a prerequisite for economic growth Erik Mellander and Christina Hakanson Transparency in bankruptcy law: A perspective on bankruptcy costs across Europe Karin S. Thorburn Economic growth and the governance of the financial sector in the EU: What role for regulatory transparency? Jean-Pierre Casey Bank insolvency procedures and market discipline in European banking Apanard Angkinand and Clas Wihlborg Legal determinants of the return on equity Davide Lombardo and Marco Pagano The European adoption of international financial reporting standards effects on corporate transparency Magnus Bild and Walter Schuster SOX around the world corporate transparency and risk management disclosure of European issuers in the United States Sohnke M. Bartram, Georg Stadtmann, and Markus F. Wissmann Transparency and capital structure in Europe: Evidence of firm, industry, and national institutional influences Raj Aggarwal and NyoNyo Aung Kyaw Multinational enterprises and their lobbying activities in the European Union Amjad Hadjikhani and Pervez N. Ghauri Corruption and FDI: Japanese FDI inflows into the EU, 1996 2002 Andrew Delios, Ram Mudambi, and Pietro Navarra