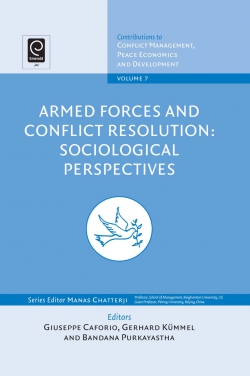 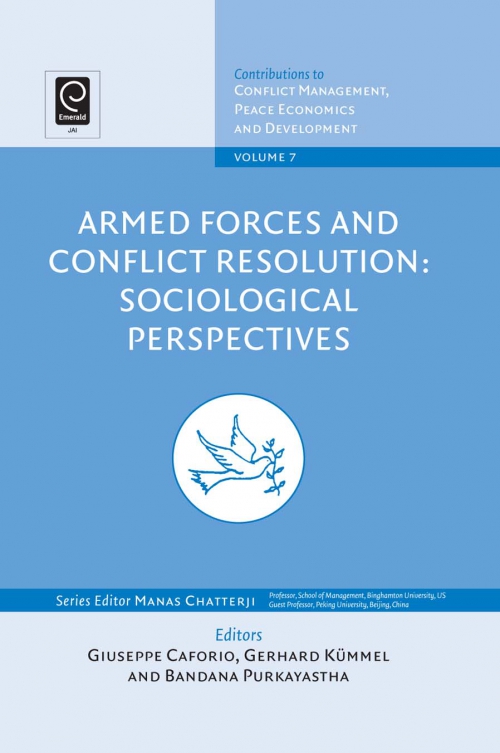 Description
The study of armed forces and conflict resolution has undergone important developments at the turn of the millennium, driven by emerging events. The fall of the Berlin Wall, the end of the Cold War, the resurgence of nationalism and religious wars, ethnic cleansing, September Eleven, the War on Terror, and asymmetric warfare, the United Nations' inability to manage and successfully conclude military operations, are so many flash points of how much things have changed since the Cold War. The action of militaries has become more important, more difficult, more controversial, and, at the same time, insufficient, without parallel methods and political actions for resolving conflicts. As scholars conceptions of conflicts have changed, so have their understanding of conflict resolution and peace. This latter scholarship now spans analyses of the role of governments, civil institutions, and organized groups. The studies of building and sustaining peace now span institutional, inter-actional, and interpersonal levels in order to conceptualize a more holistic, long-term vision of peace.This book brings together contributions from scholars of various social science disciplines on three themes that appeared significant for the study of the phenomenon of conflict and conflict resolution. The first theme is centered on the new aspects of war in the twenty-first century where asymmetric warfare has changed many rules of the game, imposing a profound transformation on the military, not only tactical, but also structural, preparatory, mental and ideological.The second theme regards the delicate relations between the armed forces and societies. The ever-greater technicality of military operations and their lower comprehensibility to the broad public as a result, together with increased sensitivity in many countries in regard to the use of violence and death, have created social situations and problems that deserve to be investigated. The third theme, building and sustaining peace, operationalizes different types and levels of violence and conflict. It assesses ongoing efforts, for instance, governments trying to contain or diffuse conflict, businesses and national service schemes building peaceful civil spheres, and the efforts of organized groups to claim, shape, and extend the spheres of life that are free of conflict.
Contents
Introduction. The asymmetric warfare: In search of a symmetry. Military Organization and Asymmetric Conflicts: Changing Approach. The impact of asymmetric warfare on the military profession and structure: lessons learned from the Ottoman military. Dr. Strangelove or how I learned to stop worrying and love the bomb: suicide attacks in asymmetric warfare. Use and impact of Information-Communication Technology in modern conflict: The war in Iraq. Terrorism and security in the caribbean before and after 9/11. Afghanistan talks. Experiential isomorphism in the military. Introduction. European civil–military relations in transition: The decline of conscription. News from the home front: Communities supporting military families. Attitudes and opportunities: self-selection and anticipatory socialization effects in youth perceptions of the military. The military and civil society in Korea. Hidden agenda in Paraguay: The dilemma of external democratization through U.S. military co-operation. Military and politics in south and central America: the self-perceptions of the armed forces in Latin America. Language matters in the military. Introduction. The impact of counterterrorism and strain on Palestinian terrorism. Communal conflict, state failure, and peacebuilding: The case of Ambon, Indonesia. National business, civil war abatement and peacebuilding. National youth service: an institution for building and sustaining peace. Building and sustaining the fabric of peace: Notes from the field. General Introduction. List of Contributors. Foreword. Conflict management, peace economics and development. Armed Forces and Conflict Resolution: Sociological perspectives. Copyright page.