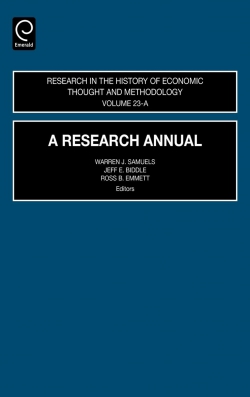 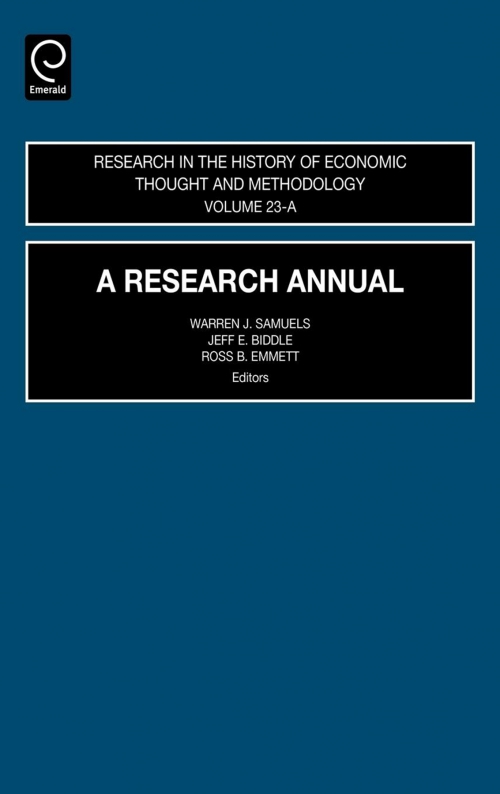 Description
Volume 23A of this research annual first presents two articles on Adam Smith, one on his use of the concept of the invisible hand, and another on his use of Isaac Newton's methodology; an article on rival conceptions of distribution: in the 20th century; and a set of introductory notes to the study of the history of economic thought. Secondly, the volume presents multiple review essays on a book on the history of institutional economics, and single review essays on a variety of books, including books on causality, economic thought and the making the European monetary union, the Scottish Enlightenment, economic justice and theological values, a dictionary of economic quotations, economic morality, Thomas Reid, policy making, and autobiographical essays by Nobel laureates in economics.
Contents
List of contributors. Editorial board. Acknowledgments. The invisible hand of god in Adam Smith (A. Denis). Some principles of Adam Smith's Newtonian methods in the wealth of nations (E. Schliesser). Inequality of what among whom? Rival conceptions of distribution in the 20th century (R.S. Goldfarb, T.C. Leonard). Introductory notes to the study of the history of economic thought (II) (W.J. Samuels). Review essays. Hodgson's The evolution of institutional economics (B. Bateman, D.W. Bromley, W. Waller). Hunt's history of economic thought (J.E. King). Hoover's causality in economics (J. Reiss). Maes's economic thought and the making of European monetary union (R. W. Diman). Sakamoto and Tanaka's The rise of political economy in the Scottish enlightenment (W. Henderson). Wood's Economic justice and theological values (W. Hendeson). McCann's The Elgar dictionary of economic quotations (W.J. Samuels). Busch's The eclipse of morality (G.L. Johnson). Wood's The correspondence of Thomas Reid (M. Johnson). Featherman and Vinovski's Social science and policy making (W.J. Barber). Breit and Hirsch's Lives of the Laureates (W.J. Samuels).